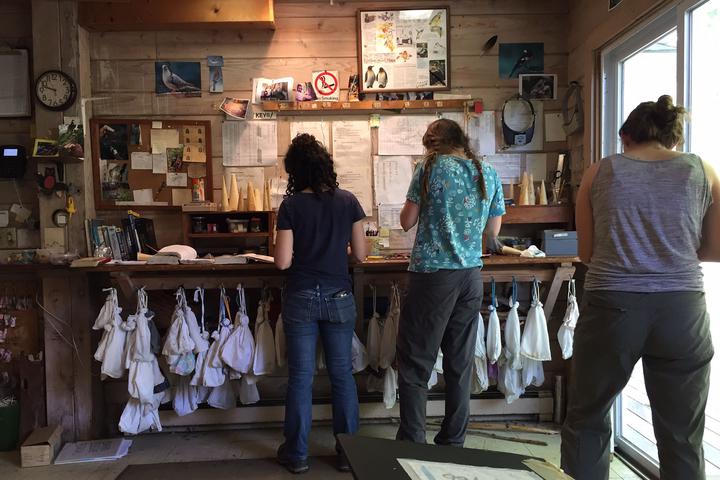 We analyzed data from across five decades of passerine bird banding at Manomet in Plymouth, Massachusetts, USA. This included 172,609 captures during spring migration and 253,265 during fall migration, from 1969 to 2015. Migration counts are prone to large interannual variation and trends are often difficult to interpret, but have the advantage of sampling many breeding populations in a single locale. We employed a Bayesian state-space modeling approach to estimate patterns in abundance over time while accounting for observation error, and a hierarchical clustering method to identify species groups with similar trends over time. Although continent-wide there has been an overall decrease in landbird populations over the past 40 years, we found a variety of patterns in abundance over time. Consistent with other studies, we found an overall decline in numbers of birds in the aggregate, with most species showing significant net declines in migratory cohort size in spring, fall, or both (49/73 species evaluated). Other species, however, exhibited different patterns, including abundance increases (10 species). Even among increasing and declining species, the specific trends varied in shape over time, forming seven distinct clusters in fall and ten in spring. The remaining species followed largely independent and irregular pathways. Overall, life-history traits (dependence on open habitat, nesting on or near the ground, migratory strategy, human commensal, spruce budworm specialists) did a poor job of predicting species groupings of abundance patterns in both spring and fall, but median date of passage was a good predictor of abundance trends during spring (but not fall) migration. This suggests that some species with very similar patterns of abundance were unlikely to be responding to the same environmental forces. Changes in abundance at this banding station were generally consistent with BBS trend data for the same geographic region. 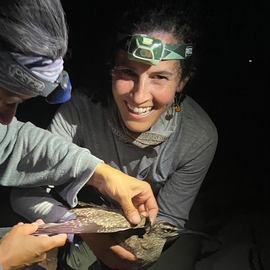 I am a graduate student in the Senner Lab at the University of Massachusetts Amherst. My current research is focused on the stopover ecology of long-distance migratory shorebirds.